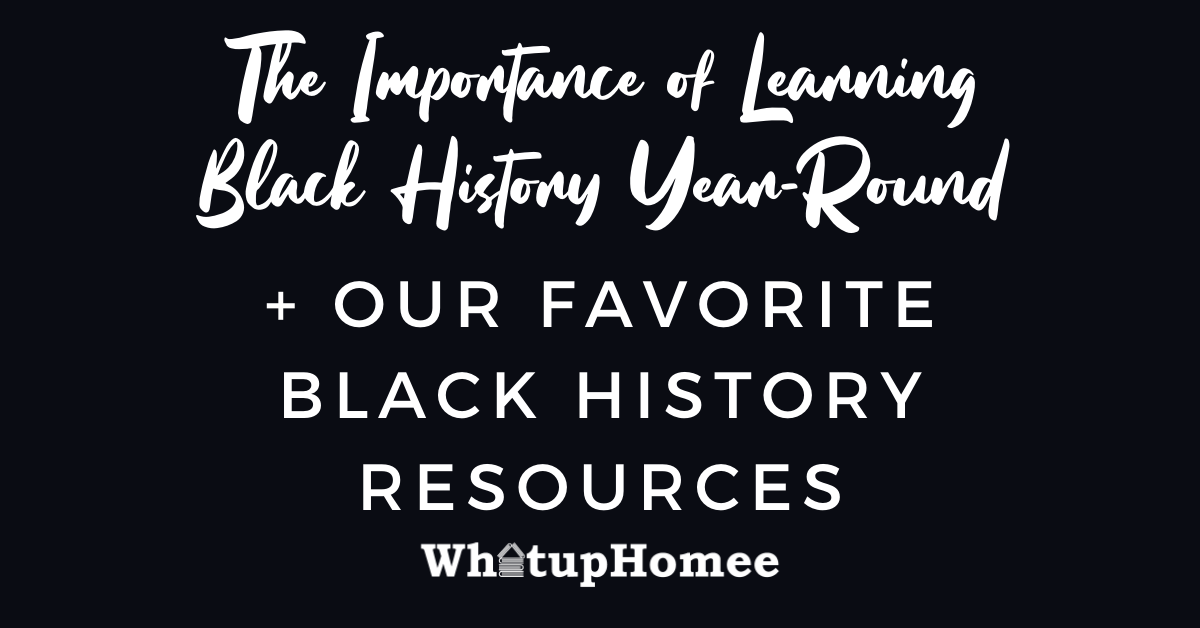 As black homeschooling families, we have a unique opportunity to educate our children in meaningful ways that can significantly impact the culture.

One of the primary ways we can impact the culture is by teaching our children Black history year-round. By doing this, we are teaching them true history, not the white-washed version that we learned, and that many are still learning in homeschools, public schools, and private schools all over the country.

It’s important that black children but really ALL children learn that the history of Black people didn’t begin in bondage in America but on the continent of Africa. As people of African descent, we need to understand the beautiful, rich history of Africa. My children and I have enjoyed learning about people like Mansa Musa, Queen Nzinga, Hatshepsut, and Shaka Zulu.

Learning history from the perspective of people that look like us helps us connect with history in a more personal way. It gives us pride and inspires us. It also gives us a greater appreciation for the sacrifices made by our ancestors in their fight for the civil rights that we enjoy today.

Studying Black history year-round is also important because it provides context for how we got to where we are today and a deeper understanding of the issues we still face in this country. Many of our present cultural and political issues are not new but rather are unresolved issues from the past. It’s important for children to understand that while progress has been made, we are still very much fighting for equal rights, equal protection, and full humanity.

Additionally, as someone that is both unashamedly Christian and unapologetically Black, I believe it’s crucial that our children know about the presence of Black people in the Bible and our contributions to church history in order to dispel the myth that Christianity is the White man’s religion.

Full Disclosure: WhatupHomee is a participant in the Amazon Services LLC Associates Program. As an Amazon Associate I earn from qualifying purchases.

BlackPast with its African American Timeline is my go-to resource for including Black History within the context of our American history lessons. The site is also great for researching African history.

Greenwood Cultural Center is a great resource for learning about Black Wall Street and the Tulsa Race Riot of 1921.

Below are some of our favorite books:

Harriet Tubman: Conductor of the Underground Railroad by Ann Petry explores Harriet’s childhood, marriage to a freedman, and as well as her work as an underground railroad conductor and abolitionist.

Elijah of Buxton by Christopher Paul Curtis is historical fiction about the adventures of an 11-year-old boy who was the first child born free in Buxton, a Canadian settlement of runaway slaves. Our entire family enjoyed reading the book, then listening to the audiobook narrated by James Avery (Uncle Phil from The Fresh Prince of Bel Aire).

Malcolm Little: The Boy Who Grew Up to Become Malcolm X by Ilyasah Shabazz is a beautifully written and illustrated biography of Malcolm’s childhood written by his daughter.

X: A Novel by Iyasah Shabazz is another biography about Malcolm written by his daughter. This book covers his teen years and time in jail which resulted in his conversion to Islam.

Martin’s Big Words: The Life of Dr. Martin Luther King Jr by Doreen Rappaport explores the impact of words on Martin’s life and the impact of Martin’s words on the country.

Henry’s Freedom Box: A True Story from the Underground Railroad by Ellen Levine is the beautifully illustrated and emotional story of Henry “Box” Brown, a slave that mails himself to freedom.

Ron’s Big Mission by Rose Blue is the empowering and inspiring story of nine-year-old Ron McNair and how his love for books challenges the rules of a library in 1950s South Carolina.

Little Leaders: Bold Women in History is a beautifully illustrated and informative book by artist and author Vashti Harrison that introduces readers of all ages to the stories of forty Black women that blazed trails and made history.

Becoming Muhammad Ali is written in both prose and in verse by Kwame Alexander and James Patterson collaboratively tells the story of young Cassius Clay’s childhood in Louisville, KY, and his life leading up to his becoming the boxing champion and activist we now know as Muhammad Ali.

Roll of Thunder, Hear My Cry is the first book in the classic historical fiction novel series written by Mildred D. Taylor about the Logans, a land-owning black family in Depression-era Mississippi.

Ruby Bridges– Ruby Bridges was only 6 years old when she became one of the first black children to integrate an all-white school in 1960 New Orleans.

Hidden Figures– Three black women working at NASA during the Space Race to make John Glenn the first American to orbit the earth.

42– Jackie Robinson was the first black baseball player signed to the Brooklyn Dodgers. He persevered in the face of great racism while wearing the number 42 on his back.

Race– Jesse Owens, a black track runner that competes in the 1936 Olympics in Nazi Germany

Hatshepsut was a female Egyptian Pharoah.

Let us know if you find these resources empowering and helpful for integrating Black history into your lessons year-round.

Share your favorite Black history resources in the comments below.