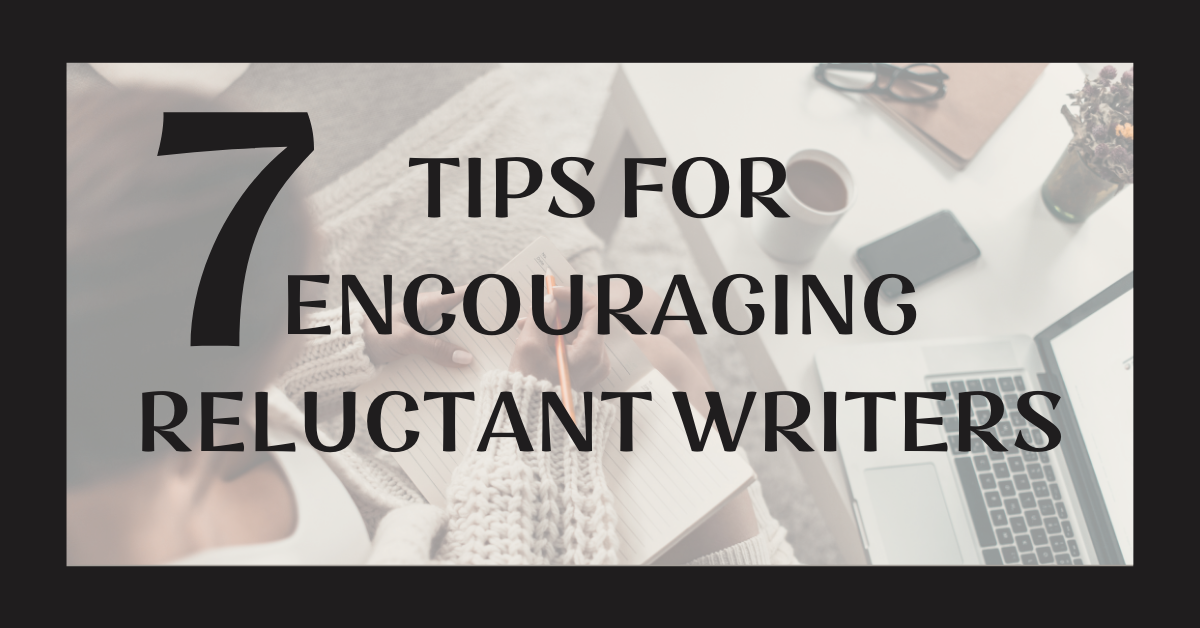 When my son was a year old he saw his sisters holding pencils and writing, and he wanted to do it too. As he got a little older, he began to find writing frustrating. It was challenging for him to figure out how to write his letters properly, spell correctly, and use proper punctuation all while trying to get his thoughts and ideas down on paper. By the time he was in third grade, I noticed he was losing his confidence and becoming more reluctant to write.

It was during this time that I decided to be more intentional about allowing my children to cultivate a love for writing.

Here’s what I did…

I transcribed for them.

When my children were younger, I would transcribe their stories and ideas so that they could see that writing is just another form of communication. I would also have them narrate (retell or tell back) to me what they learned after every reading and would transcribe their narration so they would understand the concept of written narration as they got older.

Allowed them to copy passages of their choice from books they’re reading.

Each day of the week they’d copy either their favorite scripture, poem, quote, or literature passage for copywork. When I selected the passages they didn’t find copywork as enjoyable, so I’d allow them to select their own passages as long as they are thoughtful about their selections. It was interesting to read the different passages, scriptures, and quotes they chose each week.

I gave them the freedom to write about topics that interest them.

When they were younger they’d have to do daily journal writings. Sometimes, I’d give them prompts but mostly I just let them write about whatever was on their mind. One day, they kept talking about the Naruto anime. So as a writing exercise, I asked them to write about their favorite character and why they liked them. I was really surprised by the thoughtfulness of their responses and gained a deeper understanding of why they connected with the Naruto anime and manga series.

I encourage them to create characters and write stories about them.

My children loved playing dress-up when they were little. This sometimes inspired the creation of characters. I would encourage them to create short stories about these characters. One of my favorites is a character created by my daughter Shaia. His name is El Machio, a vigilante outlaw she describes as the Hispanic Batman. My son Solomon created Hobo Samurai, a kid without a home that travels around fighting injustice everywhere he goes.

I’m gracious and patient when correcting them.

I used to stress about run-on sentences and misspelling when my girls were younger. With my son, I try to be more gracious and patient when pointing out spelling and grammatical errors. There are times that I don’t point out errors at all. I’ve stopped stressing about the mechanics of writing and am more concerned with encouraging my children and helping them flesh out their ideas while gently pointing out grammatical and spelling errors. My high schoolers are great writers and Solomon’s writing continues to improve every day.

Introduce them to blogging.

A few years back, I found a website called Kidblog where we created a classroom blog and each kid was able to create their own blog posts. Initially, they were reluctant to blog, but very quickly got into it after their first posts. They would write about whatever was on their mind like an online journal or I’d have them do written narration as a blog post. Then, we’d share their blog posts with family and friends.

I’ve found that giving them many opportunities to write about the things that pique their interest, and by being patient and gracious in correction, they’re more willing to write and their writing is more insightful and enjoyable for me as the reader.

Do you have reluctant writers?

Let us know in the comments what you do to encourage your young writers.