Hi, I’m Solomon. I’m twelve years old and this is my review of Marcus Makes A Movie by Kevin Hart.

Spoiler Alert, this book is about Marcus! He’s a kid I’m guessing that’s around my age. He lives with his dad and loves to make comics about a superhero he named Toothpick.

One day Marcus gets a knock at the door. It was his best friend J.R who asks him if he wants to play a video game. Marcus said no because he’s not supposed to play on weekdays, but J.R tells him that his dad is not home so Marcus said ok. Hours go by before Marcus’s dad comes home and catches them playing. He takes away the game box and during dinner, Marcus’s dad tells him that he’s going to sign him up for an afterschool class. After looking online, they agree to an afterschool film class.

The next day Marcus went to the film class. He was just going to sit in the corner and draw comics but his teacher told him he could actually make a movie about his comic. Everyone in class introduced themselves. They started with a boy named Khalid. Marcus knew him because they talked about comics sometimes at school. The other kids in the class are Amari- he is a DJ that wants to make some music videos, Jazmin-she wants to do makeup videos on MeTube, and last but not least there was Sierra- she is also into making movies. Her movie was going to be their group assignment. Their teachers are Darren and Trish.

The next day Marcus tried to figure out which comic would be his movie and he started writing his screenplay. When he was finished he showed his Dad. He told Marcus he was happy and said it was good but he didn’t think it was a screenplay because it was more drawings than words. But Marcus didn’t listen.

So the next day in class they read his “screenplay” and his teachers told him the same thing as his dad. The class voted on the screenplays and only one person voted for Marcus- him. He got mad and stormed out of the class. When he got on the bus with his friends Dewayne and J.R he told them what happened. Dewayne said, “I knew you weren’t going to make that movie.”  Marcus said he was still going to make a movie. So they made a bet that if Marcus could make a movie then Dewayne would give him 20 dollars, but if he couldn’t Marcus would give Dewayne 20 dollars. Marcus was so scared because he was broke and he didn’t know how to make a movie.

That’s all I’m going to tell you about the book, so you’re going to have to read it to find out what happens next in Marcus Makes A Movie.

Ok, so now I’m going to talk a little about things I liked in the book, let’s call these Extreme Spoilers!

1  I find Marcus pretty relatable to myself. Like me, Marcus does not like being made fun of and like me and he has anger problems so it’s pretty cool to read about a character so similar to me.

2  Marcus’s movie and comic are dedicated to his mom. She died from cancer and in one of his comics, Marcus made a character named Angel who is based after his mom. A lot of his comics are inspired by his life.

3  The fact that this book teaches you real tips on how to make a movie, like writing screenplays and other things is cool!

That’s all I have for this review so please get this book for your kid. I know they’ll like it! And please have them leave comments down below on the parts they liked. 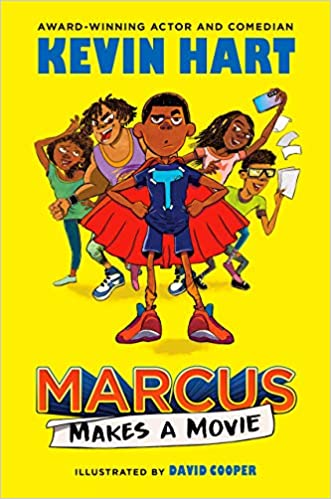 Full Disclosure: WhatupHomee is a participant in the Amazon Services LLC Associates Program. As an Amazon Associate I earn from qualifying purchases.